My 2010 resolutions were twofold. First, drink a lot. Never turn down an invitation. Imbibe heavily. I managed to have a splendid time accomplishing this goal. Good times not fit for writing on the internet were had.
The second resolution was to only read Japanese manga. I'm not much of a reader as it is, maybe I could read one regular novel in a couple of months. I figured I could work my way through a couple series of whatever manga someone recommended me and improve my Japanese ability in the process. I failed this resolution entirely. I didn't read more than a couple pages of some random comics in the relaxation room of a hot spring resort.
But I did read a bunch of non-fiction about organized crime in Japan. Check em out!
McMafia is a worldwide history of organized crime in modern times. From the Russian mafia in Israel to the Nigerian internet scammers, it covers a lot. Of course, it talks a bit about Japan, focusing on how the Yakuza manipulated a lot of the real estate economy and committed some fairly light crimes.
This was a difficult book for me to read. To be honest, I have a problem with books that have a lot of unusual-sounding people's names. Not a problem like I don't like the book, but a problem like I can't follow whats going on. The 100 pages of Harry Potter that I read gave me the same headache. Dumble-who now? If you can follow this sort of thing, enjoy. There are some photos in the middle in reference to key players, so you can use that as a reference.
This book was left at my apartment when I first moved to Japan. All about this one old Yakuza guy who lived during the early ages of modern Yakuza times. Back when they just ran gambling parlors and organized festival food stalls. In other words, kind of boring. The highlight was that he went to a VD clinic in Kawagoe, where I used to live.
The book has an air of "the good ol' days" throughout.
I had very high hopes for this one. It tells the story of Nick Zapetti, an American who stuck around after the war to engage himself in exploiting the situation. He eventually opened a very successful pizza shop that, the the authors opinion, pretty much created Roppongi. In doing so, he became known as the King of Roppongi. The American with a hold on one of the most seedy parts of Tokyo.
But all in all Zapetti's life came off as a bit lame. White guys bragging about their exploits in Japan, especially Roppongi, is a constant in this country, and I find that most people who are quick to talk are also quick to embellish the truth. I get the same feeling from Zapetti, and in the end he just seems like a dude with a popular restaurant who ended up shagging a few Japanese girls and getting screwed over in the business world.
That's not to say this book is without merits. In the backdrop of one man's story is the greater story of post war corruption, underground economy, and some crazy characters. The book brings to light just how the US influenced Japan into becoming what it is today. Gangsters, politicians, and big business melded together into the powerful, yet often corrupt system in place today.
The side story about Rikidozan is rad, and much more historically significant than that of the main character. Rikidozan, of Korean descent, became probably the most famous Japanese pro wrestler ever. What he accomplished in wrestling is nothing compared to what he did for national pride. Ask any Japanese person over 60 years old, and they will most likely have some fond memories of watching him fight off evil American wrestlers in the ring.
Looks like it will be made into a movie.
Read this book.
I'd been following Jake Adelstein's blog over at the Japan Subculture Research Center for quite some time. Working on the police beat for the Yomiuri newspaper, he developed relationships with both police and criminals. Always searching for the scoop, he uncovered a deal between the head of the Goto-gumi and the FBI. Basically, for some information, Tadamasu Goto was secretly whisked away to the States and put on the top of UCLA's liver transplant list, which is pretty sketchy. Adelstein became a marked man after he went public with his discovery.
I though that Adelstein's first book would focus on that story alone. Instead, it is an account of his whole life on the beat. And it's amazing. The chapters are as varied in emotions as they are in topics. One chapter speaks of his affairs with hostess girls, the next about a serial killer who feeds his victims to his exotic animals, and the next details the daily life of reporters in Japan.
As far as Yakuza stuff, this book is full of it. Some truly evil sounding stuff goes down, and Jake is right there to catch it. 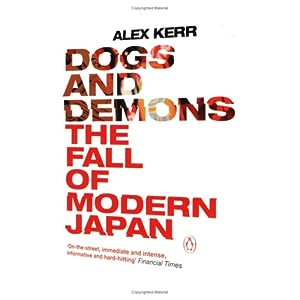 Of course, Alex Kerr's famous account of everything that is wrong with Japan includes bits and pieces about the Japanese mafia. Everyone who is interested in Japan should read this book, but only after they have lived here for a bit. Seriously, it's depressing. But the whole time, you're like, "Shit, dude is totally right."
I know there are some other Yakuza books out there, but they look more like research papers to me. I'd rather just get my "facts" from old Miike movies

Thanks for this! I'll be checking some of these out :).

Hey Brian, these are great. You should link these to your Amazon account so as to get a bit of referral money if possible...

Thanks for the advice. Cha ching!

Hi. Ive been reading your blog about japan and ramen intensively lately. Im a Japanese currently living in NYC. Thanks to your culinary enthusiasm of ramen. After I read your ramen adventure, I ended up going to HinoMaru ramen in Astoria.

And I decided to leave a comment, although It is a bit too late by now, about this bosozoku and yakuza interest of yours. I have read "tokyo underworld" sometime ago. I now wonder if you have watched "the shinjuku incident" which is also about yakuza and chinese immigrants, starring Jackie Chan. I think you'll enjoy it, or have already enjoyed most likely. haha.

Anyways, your blog is simply great reading! Big thanks for the legitimate Japan observation!! The country needs it.

Thanks for the comment. I watched every Jackie Chan movie, but that was about 8 years ago. I will rewatch it! I am sure that when I first saw it I knew nothing about Japan.