This is the only shot you get of Sawada, probably the best sushi shop in Tokyo that people know about. Notorious for a no-photo policy, the only photos I could find exist on some blog from 5 years ago. The menu hasn't changed much. 30 or so pieces of supreme quality edomae sushi. This shop appears in more insert-name-here vs Sukiyabashi Jiro reviews than any other. Very expensive. It is on many international foodie lists. Actually, on the night I went, I was the only one at the 6 seat counter who spoke any Japanese. The fallout of foodies with money using the Michelin Guide as their go-to food reference.

So, ummm, $400 sushi anyone? The price is off the charts, and the no photo policy is lame. But other than that, this is probably the best spot in Tokyo that you could eat at. Dudes with cash to spare swear by Sawada. Apparently there are a lot of dudes with cash to spare, as getting a reservation can be tough.

Some memorable highlights were the charcoal roasted tuna and the uni; packed in seawater and drained for about 15 minutes before serving. 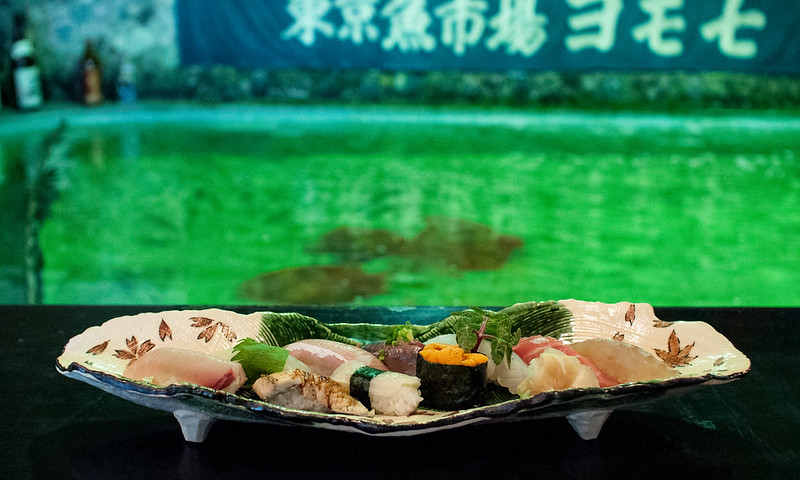 During a 3 hour break from work (English camp), I hopped on the bike and did a quick loop of the southern tip of Chiba. Being on the outlying edges of Tokyo Bay, as well as having both southern and eastern fronts to the Pacific, this part of Japan has some top quality fresh fish.

I completely forgot the name of the shop, but the おまかせ of 地魚 (jizakana - local fish) was decent. The fish was quite firm, much more than normal. Cost less than 3000 yen.

Though Tokyo's Michelin-star-dense areas of Ginza and Azabu are king to quality sushi, it is nice to get out and see what the countryside has to offer. The chefs are almost always ex-fisherman, and have some great stories to go with their sushi. 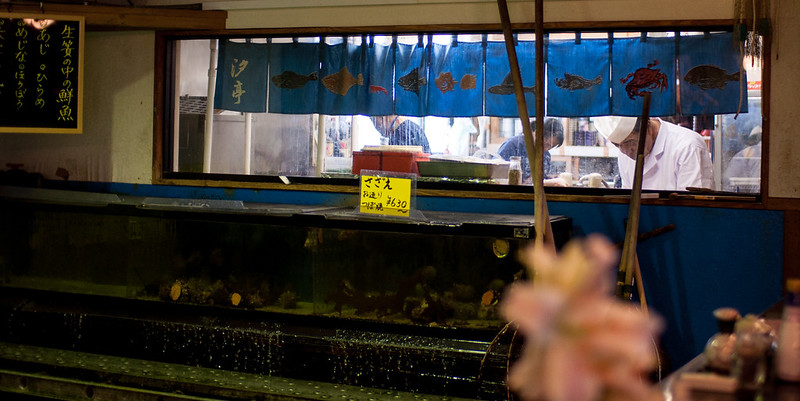 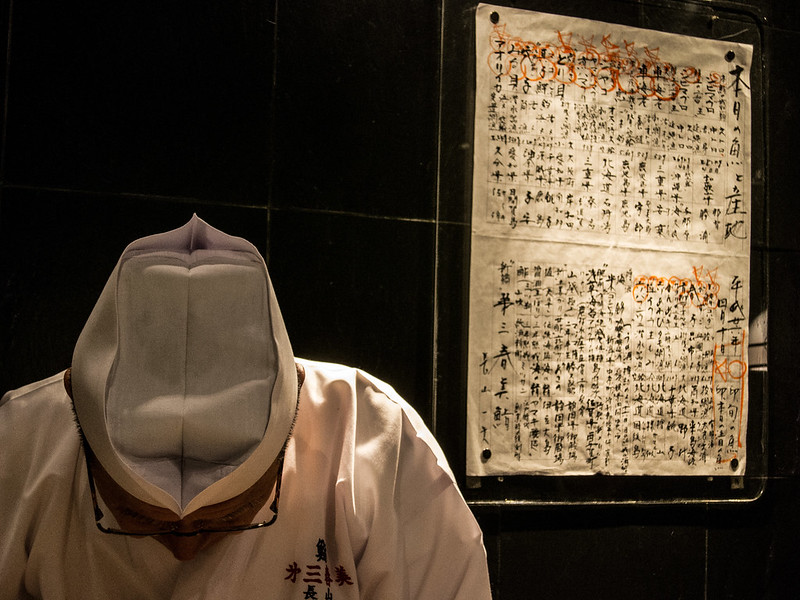 Daisan Harumi was a solid rec from a friend. Little did I know how crazy (sushi nerds rejoice!) this place would be. That menu on the wall? Nagayama-san writes it by hand every day in the morning, a task that takes about 90 minutes.

Like I said, nerdy. Not only does he list the fish by name, he includes details about the size of the fish, the exact port it came through, how it was caught, and even how it was killed. Nerdy. And just as Comic Book Guy is to graphic novels, Nagayama is to sushi. Dude berated me 4 times during the course of the meal! Awesome!

The first time, he told me I was eating my sashimi wrong. He included 2 plates; 1 for soy sauce and 1 for resting. Dip the fish completely in the soy sauce, place it on the resting plate, add some wasabi to the top, eat. I put some wasabi on first, as you typically do, and got told off, much to amusement of the other diners.

Then I got yelled at for daring to make a compliment about fish from America. Geoduck is a delicacy up in the Pacific Northwest, and when we were served a healthy portion of the most tender geoduck (海松貝 in Japanese), I asked if it was from Japan. "Yeah, it's from Japan! Not only that, it is from the best spot in Japan. That American stuff? A different variety. Mine is much more expensive!"

Lastly, dude schooled me on my Japanese. When asked if I was full, I replied with a solid 大丈夫 - I'm okay. "You Japanese is strange! You just said okay, which means you want to eat more." I swear the other people at the shop said the same thing; I was listening.

Finally, when I got it right, he said that I forgot the です, a simple grammar mistake. Like I said, schooled. By the way, when asked if you are full, you should reply with a けっこです. 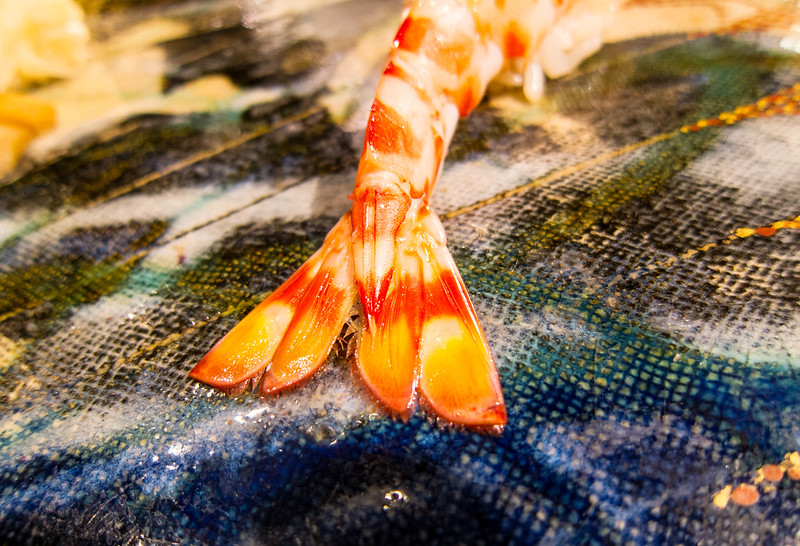 Maybe this is part of the reason why Daisan Haumi has such a loyal following. Nagayama's knowledge is extensive, and he gives no fucks.

Young tai. Sounds like a member of the A$AP crew. 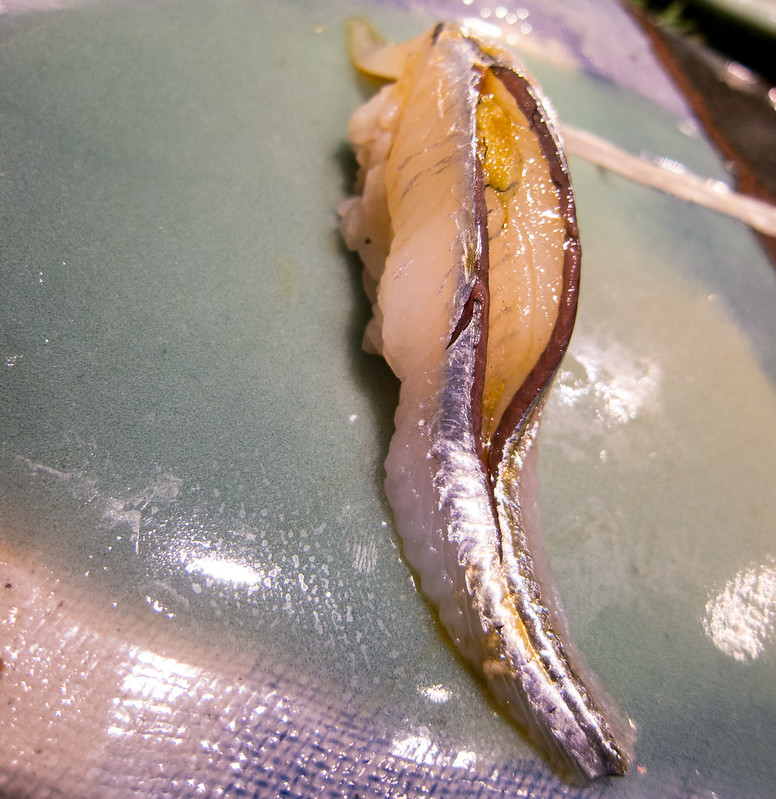 Most of the pieces he served were great. I thought there was a bit too much wasabi, but I'm sure I'm wrong for feeling that way. 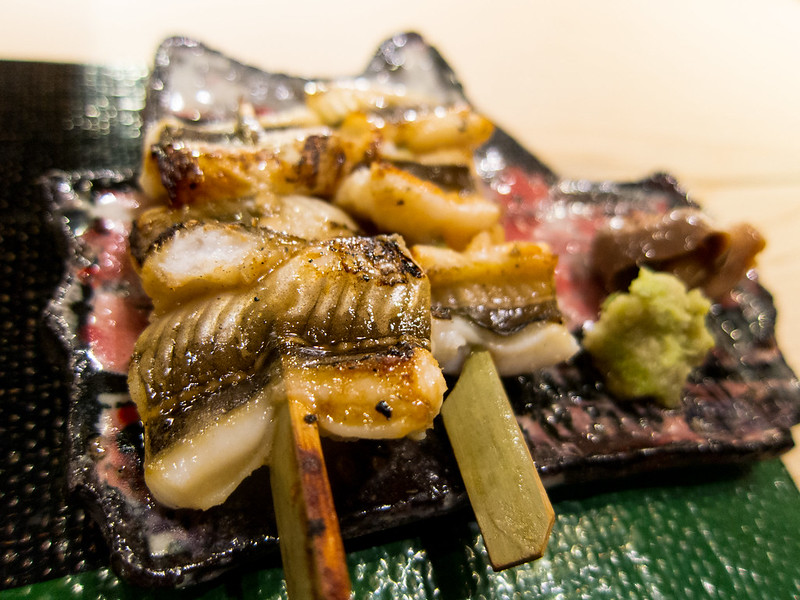 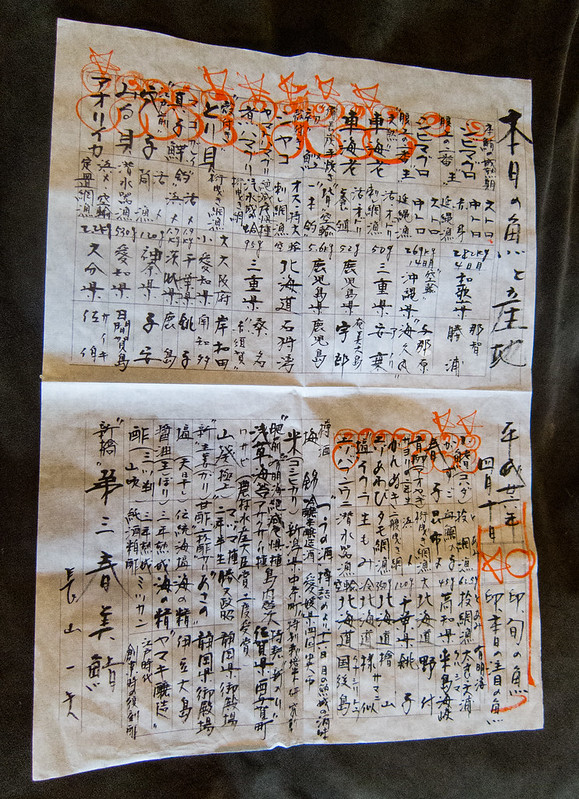 Despite his stern manner, the master is a good guy. That hand written menu on the wall? He handed it to me at the end of my meal, and gave my friend the one from the day before. Solid. 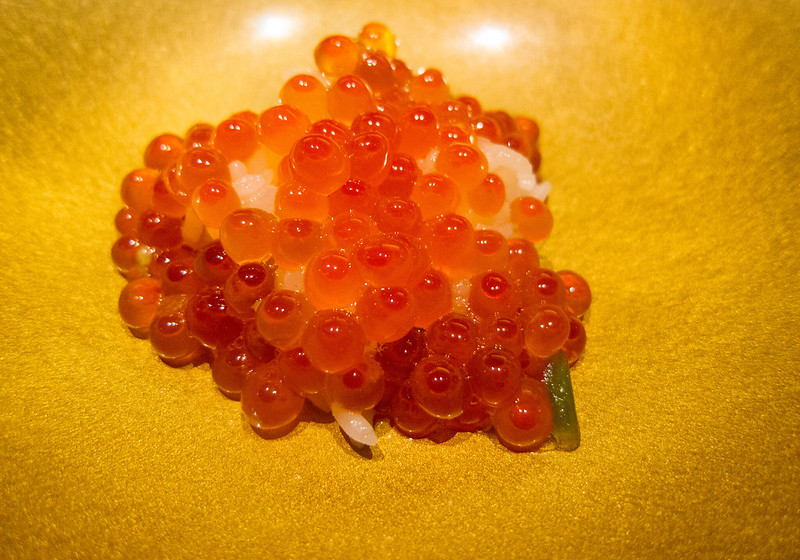 It is hard to find a good sushi set at a low price. $100 minimum, more like $200 for a decent omakase course in Tokyo. Enter Manten and prepare to have those stereotypes blown away.

5000 yen for their dinner course. Two kinds of uni, about 15 pieces of nigiri, sashimi, soups, and more. The group I went with literally couldn't finish (in their defense, they had eaten ramen only 5 hours before). 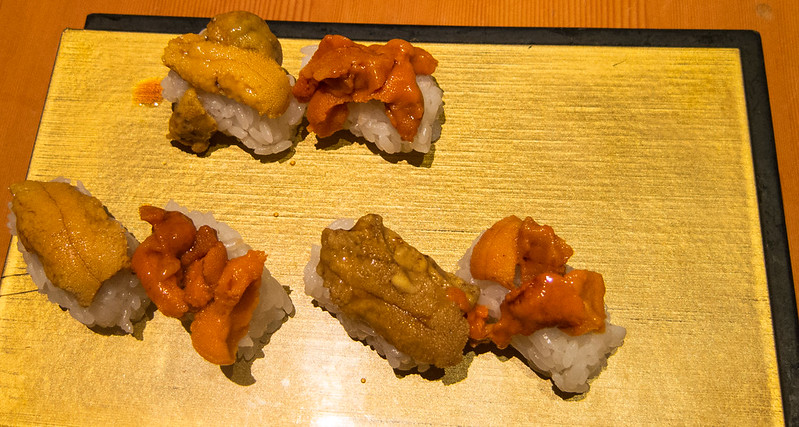 Manten is a sister shop of Sushi Ten, my go-to sushi spot, with their 10,000 yen omakase course. Manten makes up for this drastic price drop by serving slight less quality pieces, and by locating itself in the basement of a department store. You won't get any cuts of otoro or ise ebi, but you will walk away feeling like you just made the right choice.

I can't say because I haven't been, but I think lunch here could be considered the best deal in town.

I brought a tour here, and I should mention that one of their members, an elderly American lady of about 70, was having a tough time stomaching all the raw fish. Very politely, she just passed most things to her son-in-law. I asked the staff if they could cook her sushi, and they did it, no problem. I mention this because there is a big story circulating the food media about a Chinese student who asked for her sushi to be cooked at famed Sukiyabashi Jiro. People are talking maaaaaaad shit about it (well, internet people are talking internet shit). Remember, aburi means flame roasted, and tons of places serve aburi sushi.

Not a sushi-ya in the least, but sushi none-the-less. Sirius is a restaurant on the 70th floor of the renowned Landmark Tower in Yokohama. Their website proclaims Sirius is a place where you can enjoy breathtaking views as well as sumptuous cuisine. If by sumptuous cuisine they mean garbage that tastes bad, then that is a pretty good description. 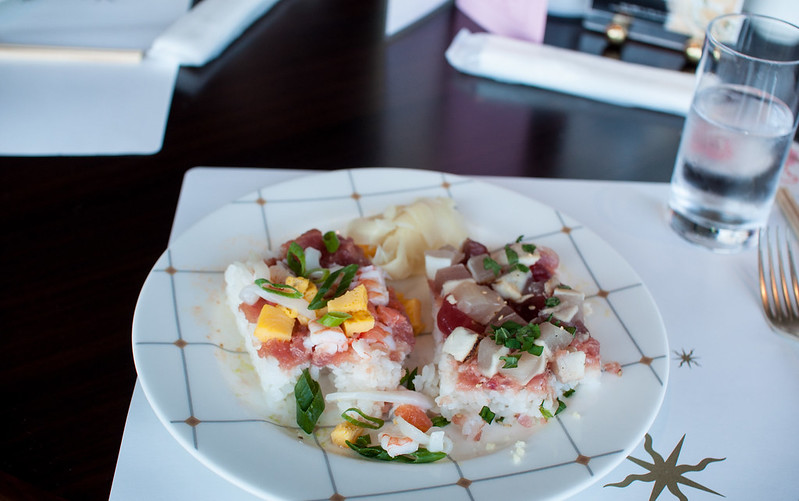 Anyways, this is a buffet place that costs 4000 yen for food that you would find at a 1000 yen level anywhere else.

But you are paying for the view, I guess, which is pretty much fantastic. 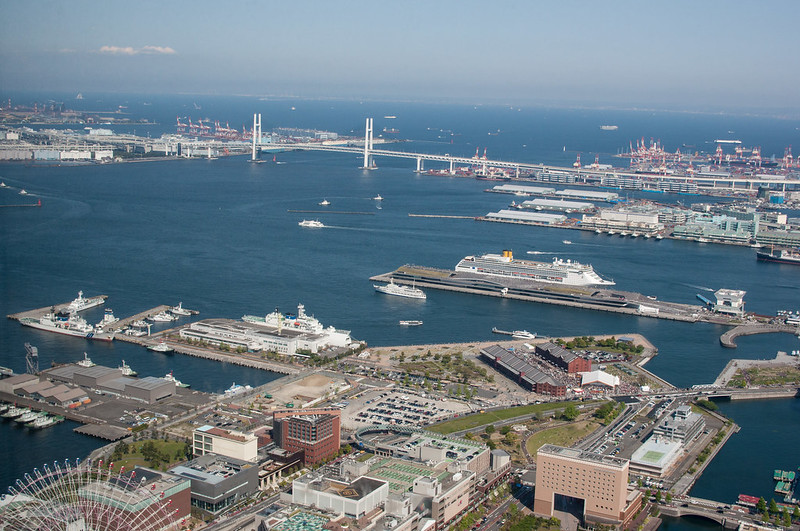 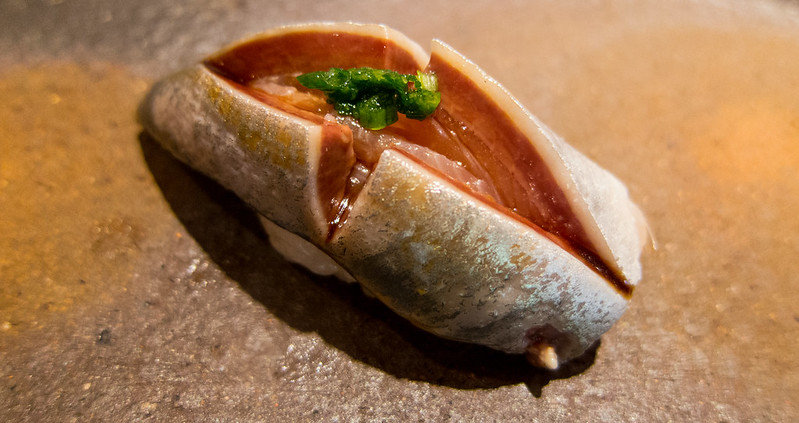 Whoah, nice recommendation from a student of mine. We were discussing our go-to sushi spots, and he mentioned Takehan as his number one.

3000 yen is a steal for what you get at lunch. Salad, 7 pieces of nigiri, a sea urchin / salmon roe rice bowl, savory egg custard, and more. Very high cost performance, and quality that could have been much, much more expensive.

I was feeling fancy, so I went with the 3000 yen course. But there is also a 1000 yen option. Expect that to be sampled very soon. $10 for lunch at a quality place? That's nuts. 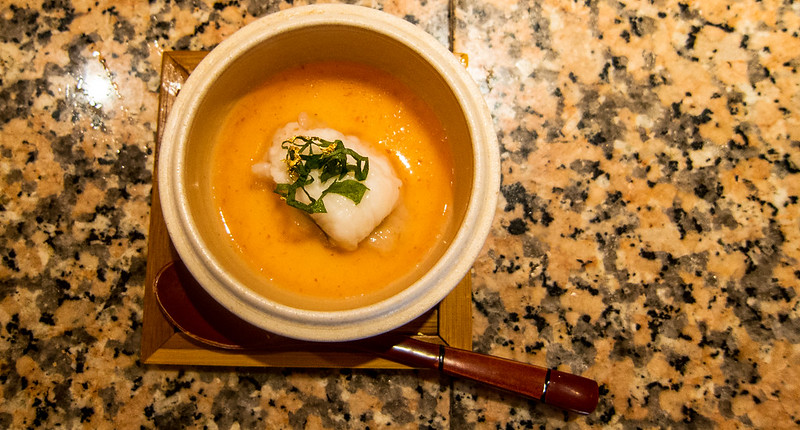 They also have a luxurious 8000 yen dinner menu. Game on.

Also, I've spent the last 3 days trying to get through to Sukiyabashi Jiro. Will I be able to get a coveted reservation in the near future? Stay tuned, it's summer!

Hi there, I read your blogs on a regular basis. Your humoristic style is witty, keep it up! Thank You for Providing Such a Unique and valuable information, If you are looking for the best higher chinese Tuition,then visit Chinese Distinction. I enjoyed this blog post.