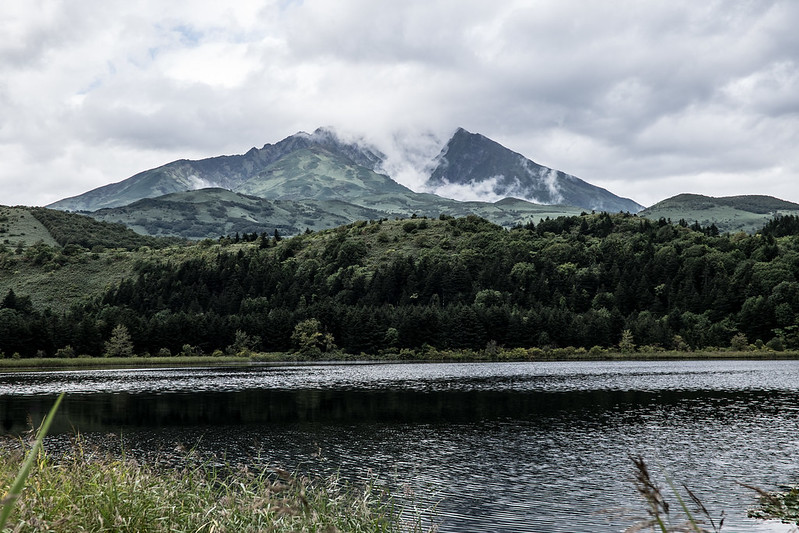 Sure, like everyone in Japan who is obsessed with ranking lists, I would love to hike the 百名山, the 100 famous mountains of Japan. I've seen a handful of blogs devoted to the subject, most of which fall by the wayside after a dozen or so. Above is Mt. Rishiri Fuji, the northernmost of the 100. Seemed like a good place to start.

But first, getting to 稚内市. Wakkanai is the northern tip of the north, way up in Hokkaido. 250km from Asahikawa (旭川), the nearest major city. It just so happened that I had work in Asahikawa, followed by 4 days off before another job in Hakodate. Time for a Hokkaido adventure of sorts.

I figured I'd hitchhike. National Route 40 is a straight shot, and surely one of the thousand truckers would have no problem picking me up. Time was in no way of the essence, and I only needed to be at the Rishiri airport by 2pm on Friday.

It was now Monday afternoon.

Begin the adventure; day one.

After walking about 5km through Asahikawa, my first driver picked me up. Actually, he was on a bicycle, but decided that he was bored and would go home to get his car. Free English lesson for the first 60km? Sure. Ended up somewhere around Shibetsu (士別).

The next leg was sparse in terms of cars. Thumb out, no one seemed interested in picking up a lone gaijin. Until these 2 old ladies. Not a day shy of 60 they were. Chain-smoking and constantly yapping, they took me the next 30km or so. At one point, they asked if they could make a quick stop. 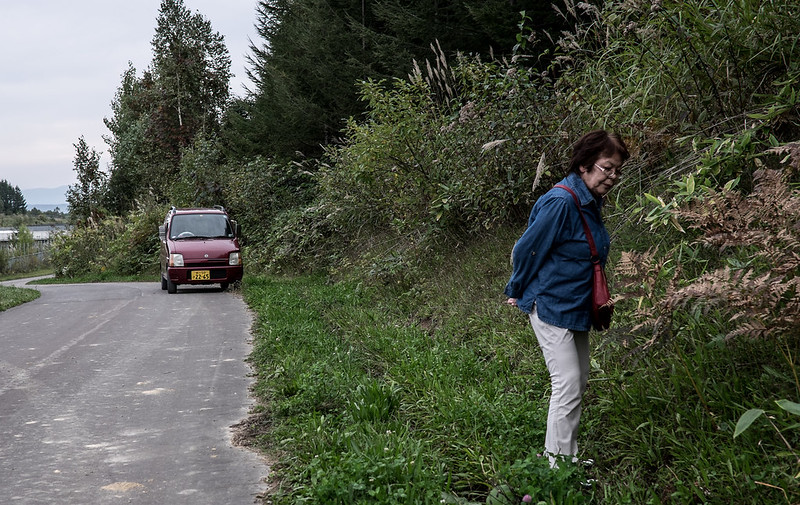 What was so urgent that they had to veer off the safety of the 40 onto bear-infested mountain roads? 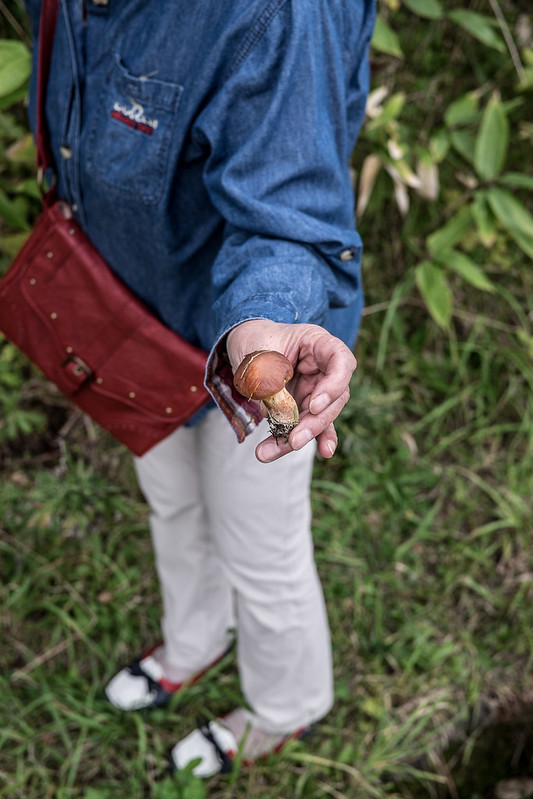 Mushroom hunting! We spent a good 10 minutes filling bags with these beauties. We then delivered said shrooms to their mother in Naiyoro (名寄). Dropped off at the Bifuka (美深) roadside service area. 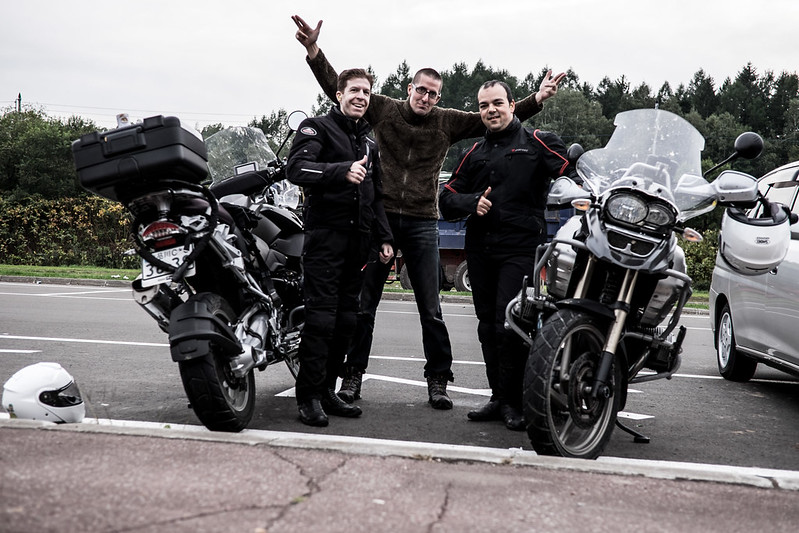 Where I ran into a couple dudes I know from Tokyo! Holy shit! That is random!

Looking at the map in hindsight, I should have just camped a few kilometers north of here. There aresome nice looking onsen, and the sun was quickly going down. This meant that now, instead of being a strange gaijin wandering Hokkaido, I was a strange gaijin wandering Hokkaido in the blackness of night. Hokkaido, if you've never been, doesn't have street lights outside of the cities. Cars would see the outstretched thumb in their headlights mere moments before passing. I figure I walked about 15km at this point before getting picked up by an ex-cop who took me off the 40, onto the 275, before finally dropping me off in Sarufutsu (猿払). What does a cop deal with in this part of the country? Mostly yakuza gangsters poaching sea urchins. 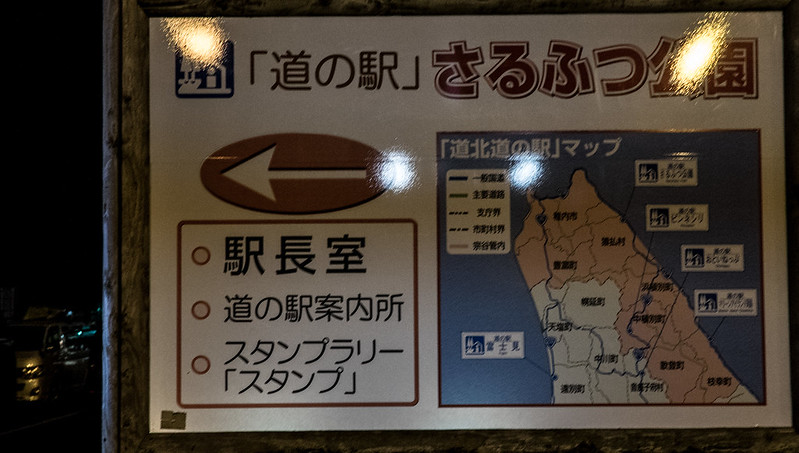 After an uneventful couple rides north, a bus driver picked me up at 10:45pm. It was the last bus of the day on an empty coastal road. "You got money? I'll take you to a park where you can camp." 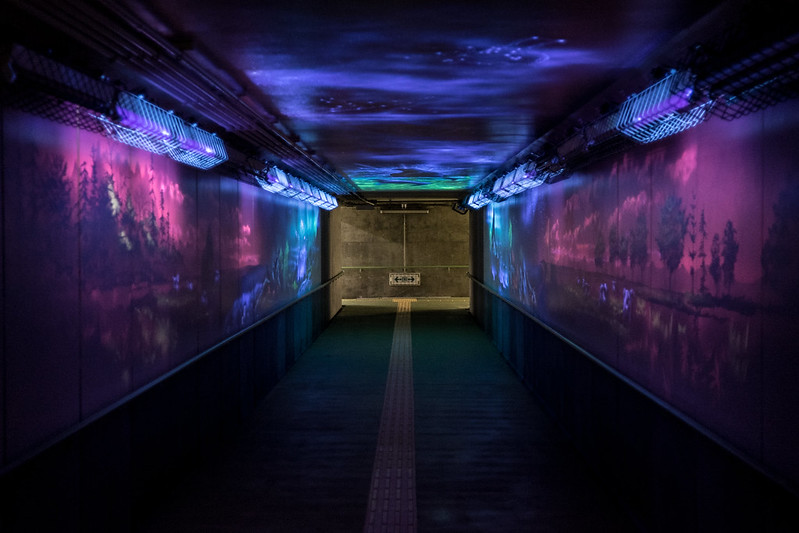 Welcome to Japan, where local, middle-of-nowhere municipalities rush to spend every yen of their budget. The Sarafutsu roadside service area built a tunnel under the road. A tunnel with black lights and a scene of Pangaea; life emerging from the primordial ooze. I debated setting my tent down here and just tripping out for the night. 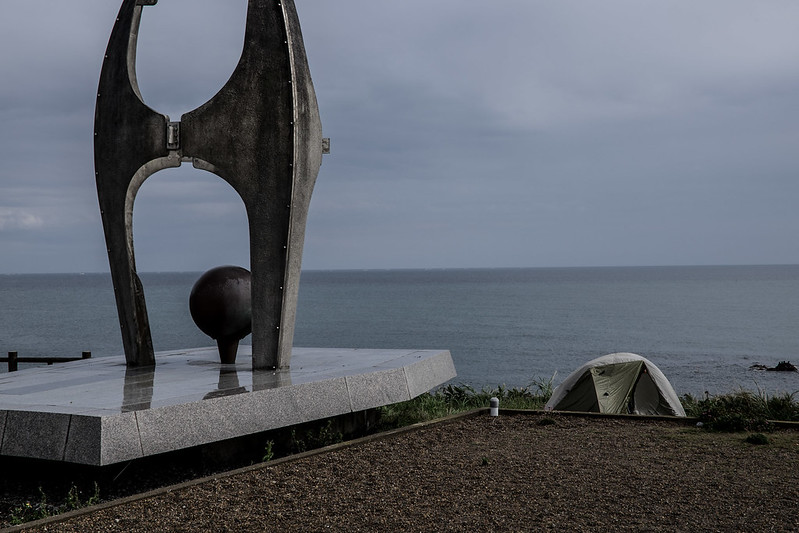 But opted for a slightly more scenic spot next to the sea. 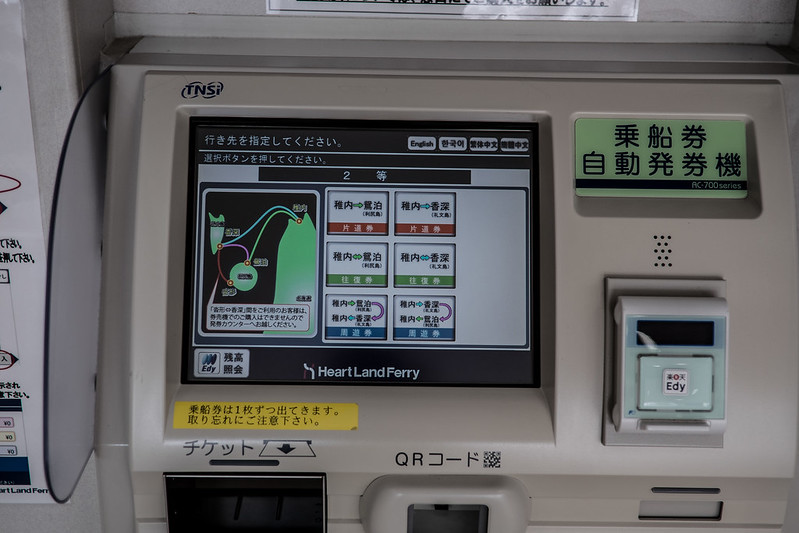 I'll just ride the 4pm ferry. Anything cool in town? 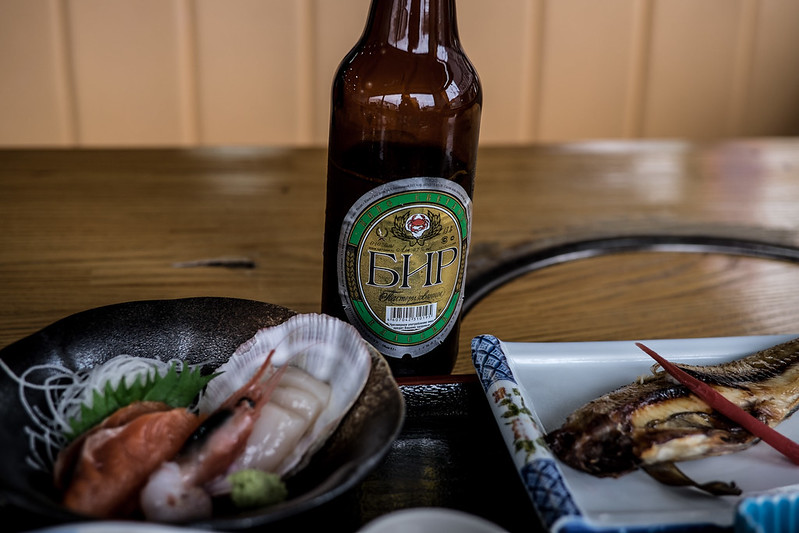 Not really. Some shit Russian beer. After I ordered from the waitress, I asked if it was good. 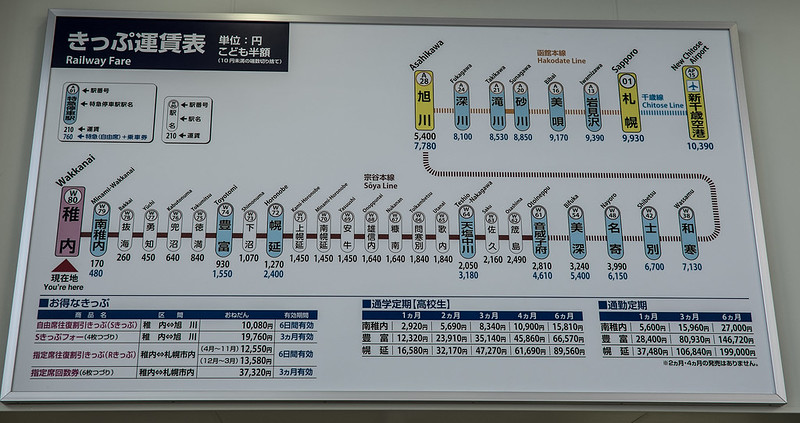 So that was my hitchhiking trip. Not that I'm hurting for funds, but the express train from Asahikawa clocks in at about $80.

And there is my ferry. 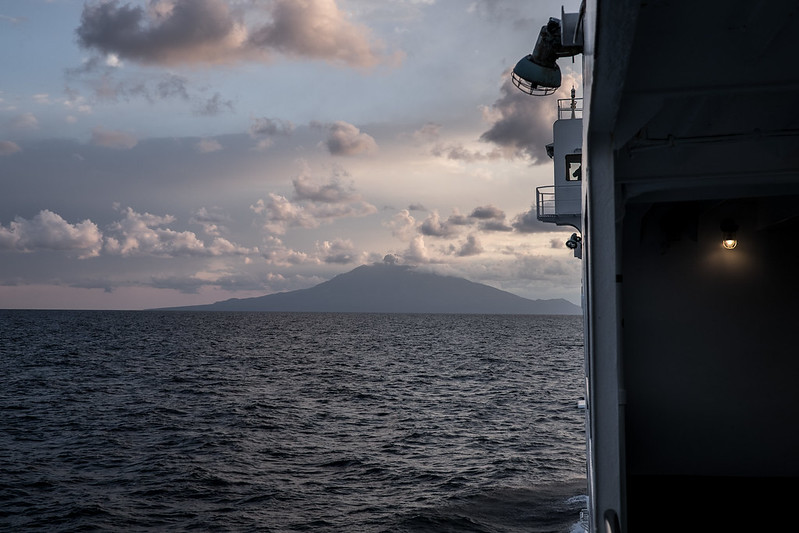 And there is the island. 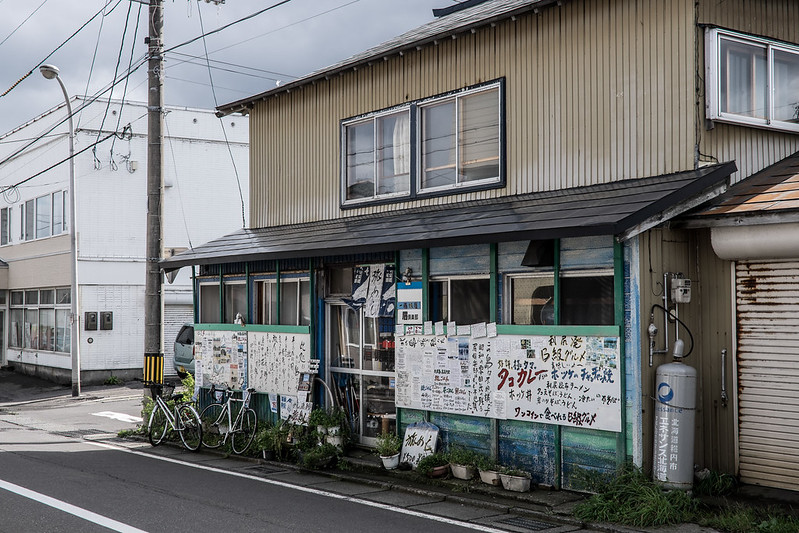 It was getting later in the day. The trail head for Mt. Rishi Fuji has a campground, so the plan was to camp there for the next 3 nights. First order of business . . . food. This funky looking spot boasted octopus curry (local octopus is known for having very long tentacles) and some other things. Spaghetti with secret stuff anyone?

Despite the menu, everyone just orders the マスターおまかせ - the master's meal of the day. 1500 yen for a table covered with Japanese home cooking. Awesome. 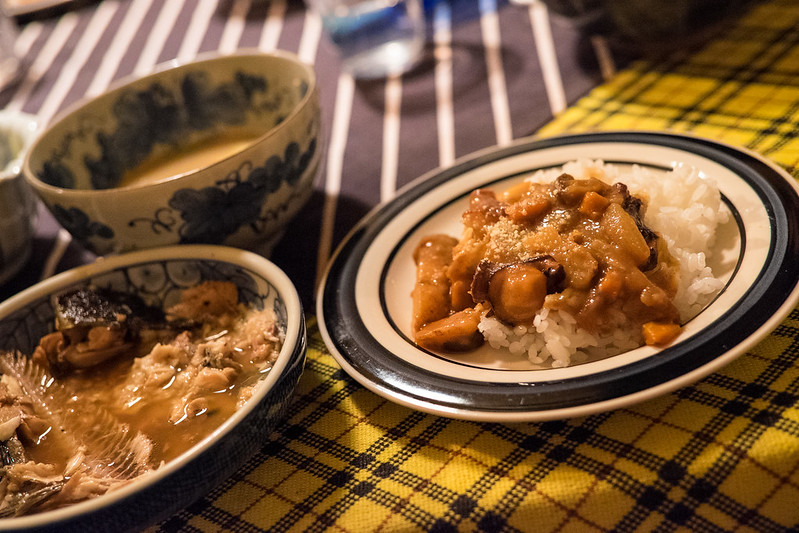 As I'm leaving, he says, why don't you stay here?

Turns out he runs a rider's house; essentially a flop house for bike and bicycle riders. Free of charge, though there is always the unwritten rule that you buy dinner. 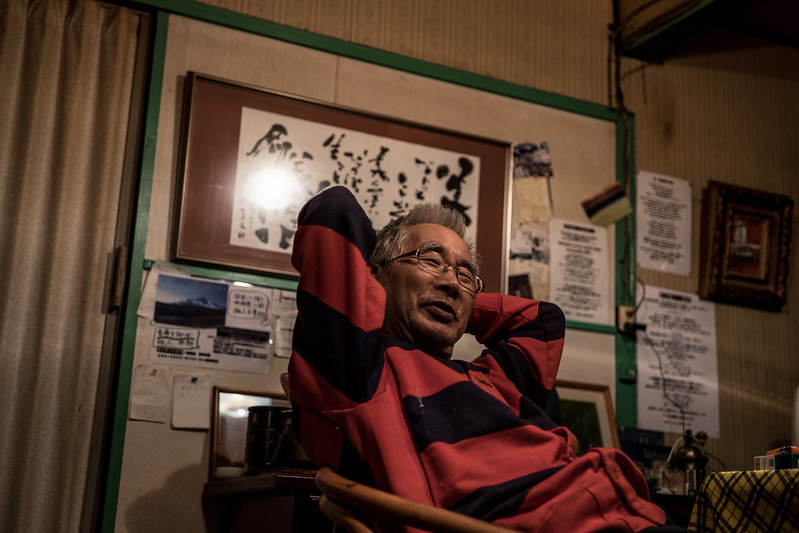 For the next 3 days I crashed here, with the coolest old guy on the island.

I should also mention the Australian who was crashing here. A round-the-world type cyclist. Also a certified conspiracy theorist, he spent the evenings explaining how the world works. A couple gems that come to mind:

Just by mentioning these things, I've now put myself into Google's underground mega-database of anti-State anarchists. 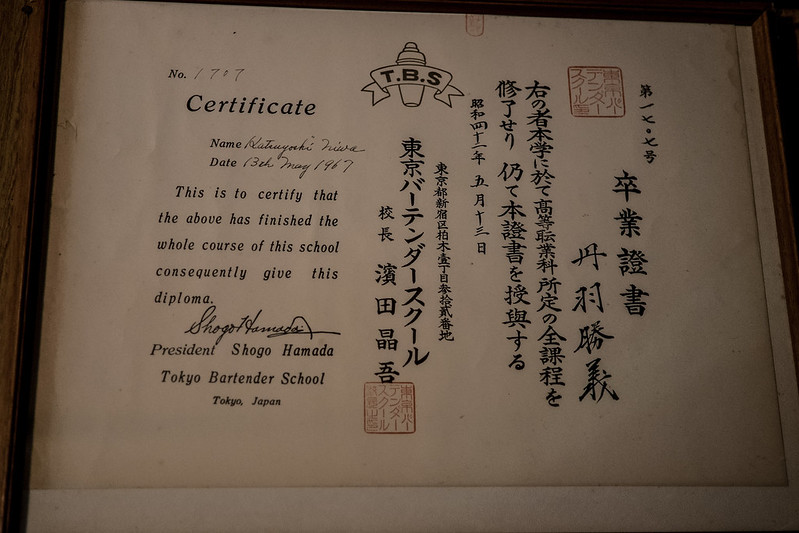 Stories of working in Ginza as a bartender in the 60s were nothing short of insanity. 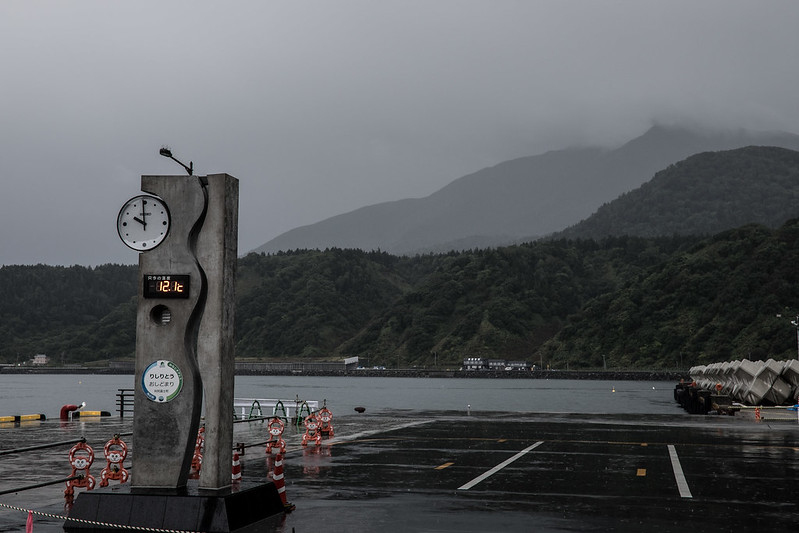 The plan was to hike from the morning. The trail was listed as 5 hours up and 3.5 hours down. But at 7am, a frozen downpour nixed that plan. If it is 10 degrees Celsius at the base, it is probably snowing on the top. Time for plan B. 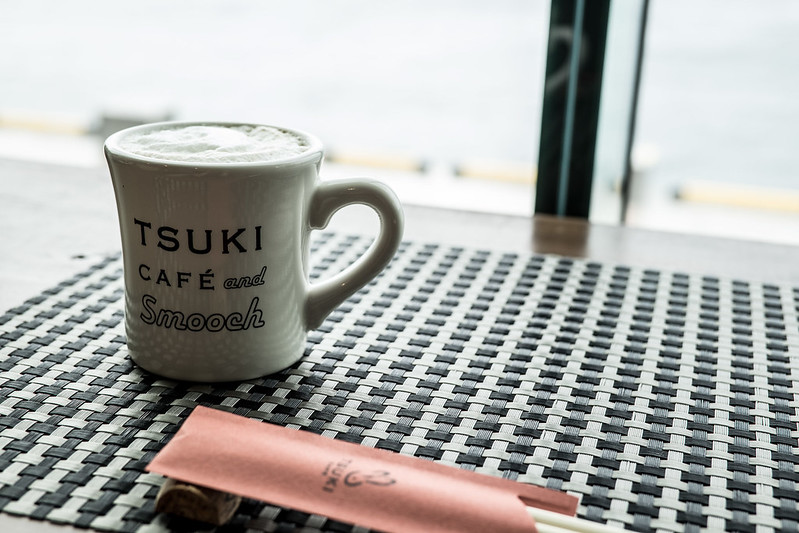 The only place to get a cup turned out to be an awesome little cafe at the ferry terminal. Hit up Tsuki Cafe if you are in the area. 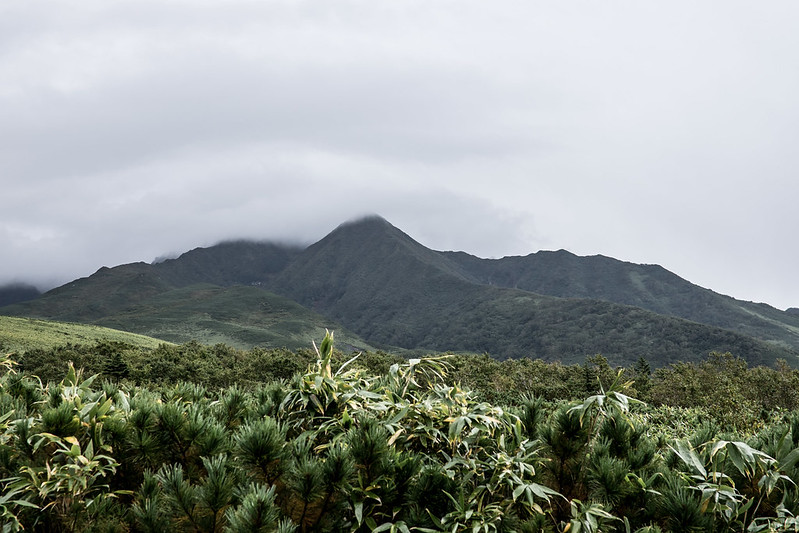 And I waited. The rule from the locals is that if you can see the peak, you can hike without worrying too much. Although the rain let up a bit, the peak never materialized. 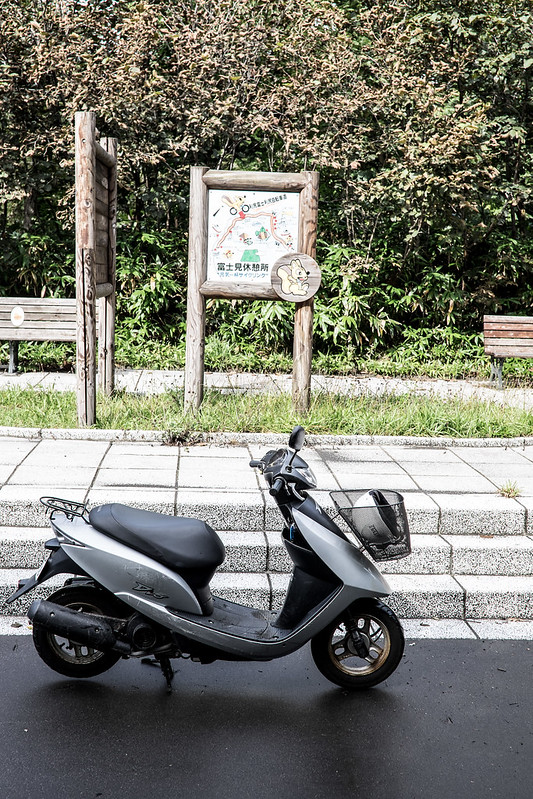 So I rented a 50cc scooter! 3000 yen for the day, and a tank of gas will get you around the island a couple of times. Some guy who isn't me said that one time he even took his scooter onto the 20km dedicated cycling path and had a blast. Awesome! 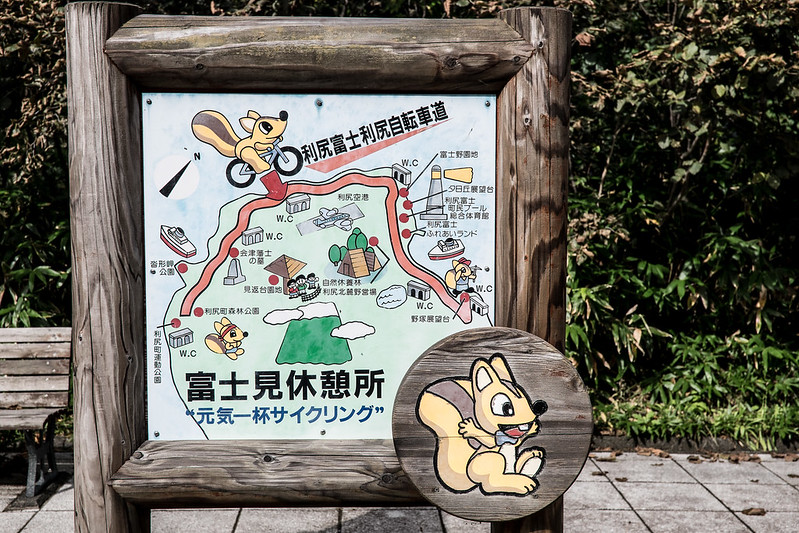 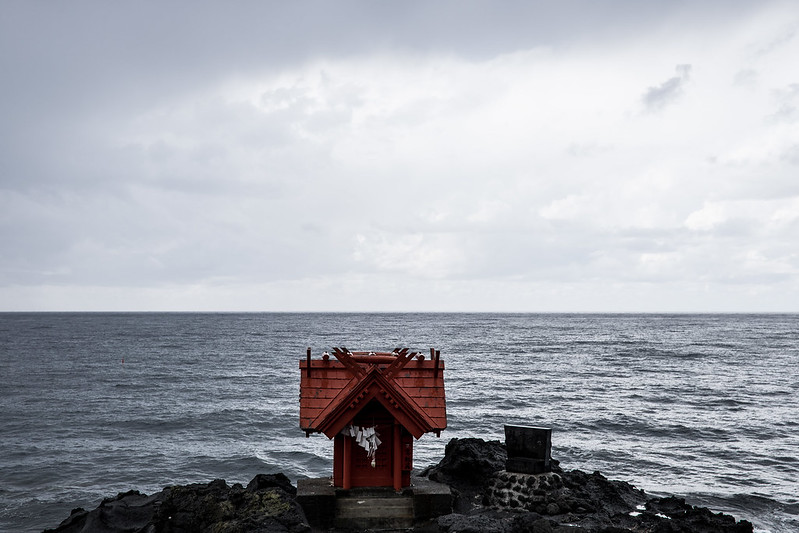 These islands produce some of the most famous uni in Japan. This set of 2 was the probably the second best I've had in my life (the first being from Sukiyabashi Jiro's Roppongi branch). 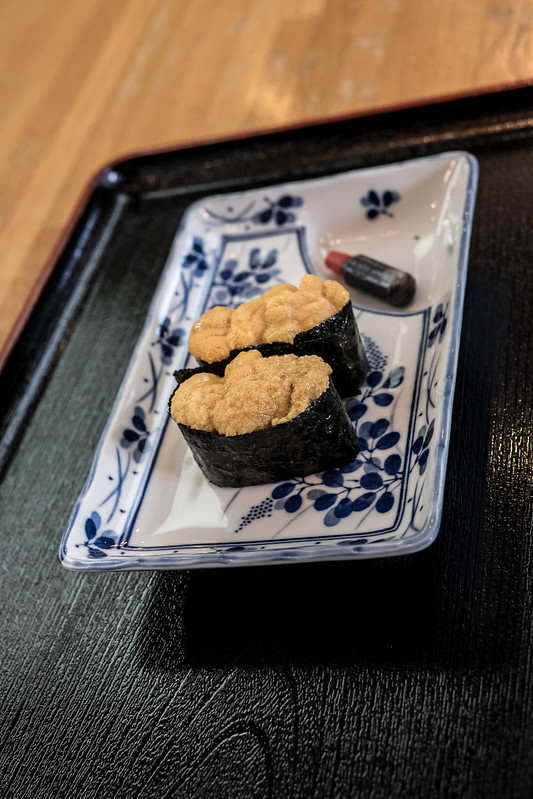 The ramen, on the other hand, wasn't so great. 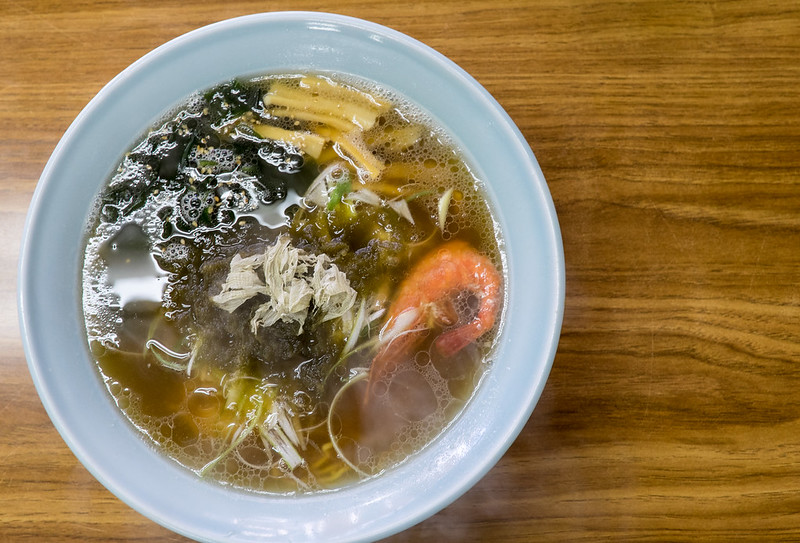 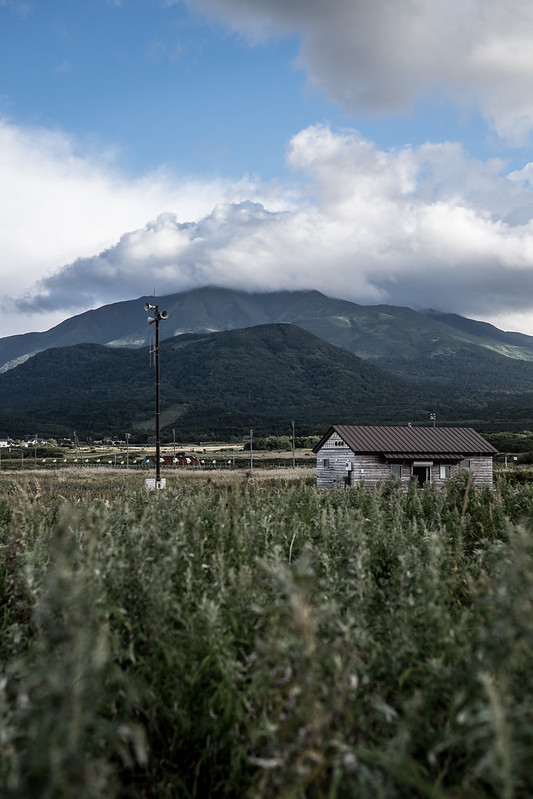 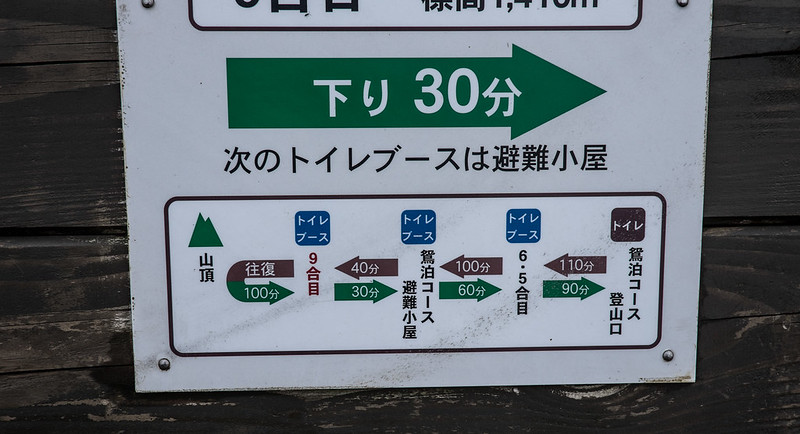 This is my first serious hike since the motorcycle accident a year ago. I was feeling good, even though it was a late start. 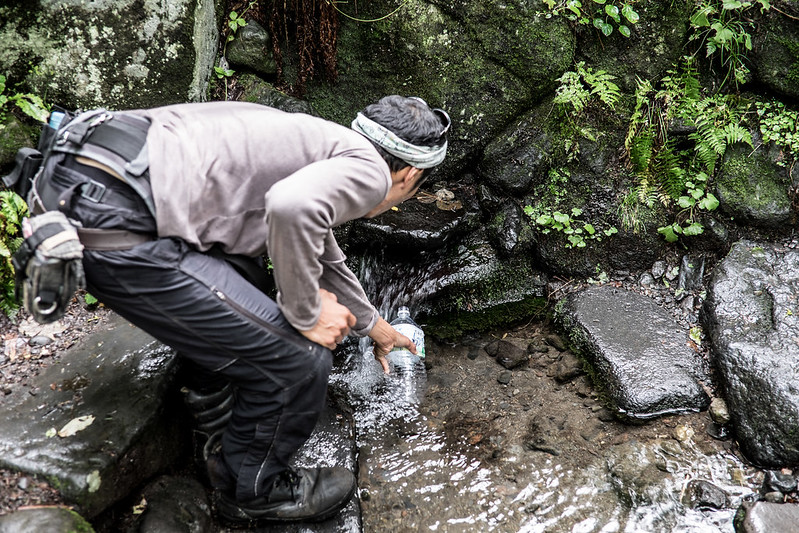 A straightforward ascent. Be sure to fill up at Kanrosen (甘露泉), one of Japan's 100 famous natural springs. Nice! More meaningless checklists to conquer. 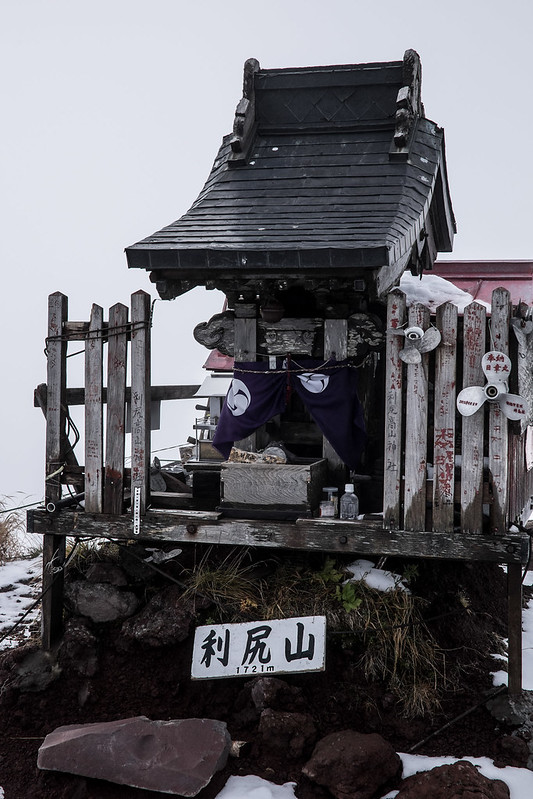 Done! Total time was 3 hours to the top from the trailhead. Nice. 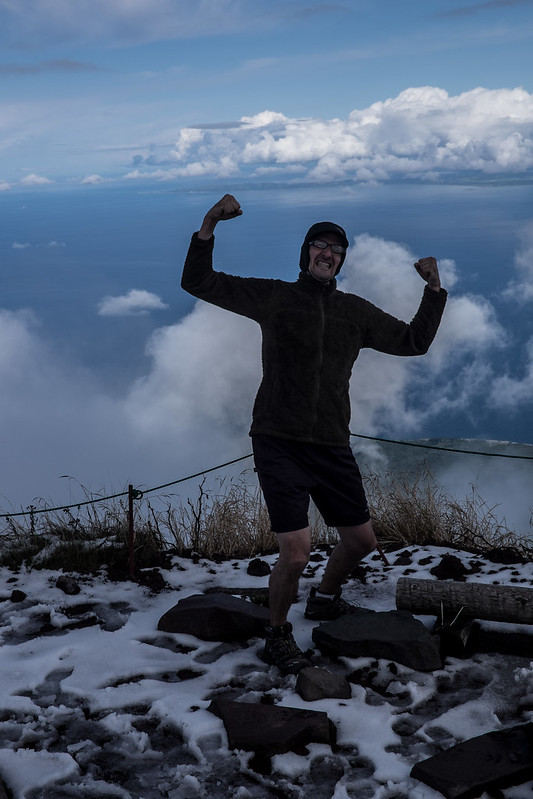 If you are taking notes, I went up and down the Oshidomari (鴛泊) track. The Kutsugata (沓形) track looks a bit more technical, and was rated as very hard. However, if you descend the Kutsugata, you will have unobstructed ocean views the entire time. You should do that. 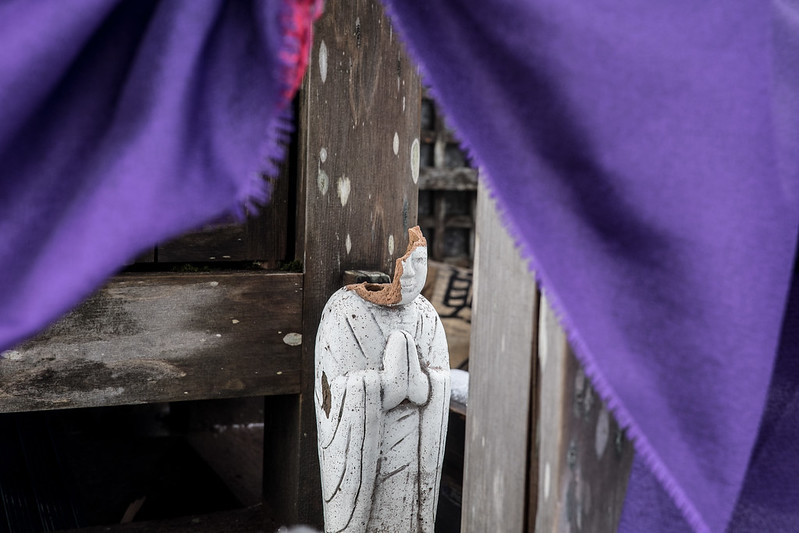