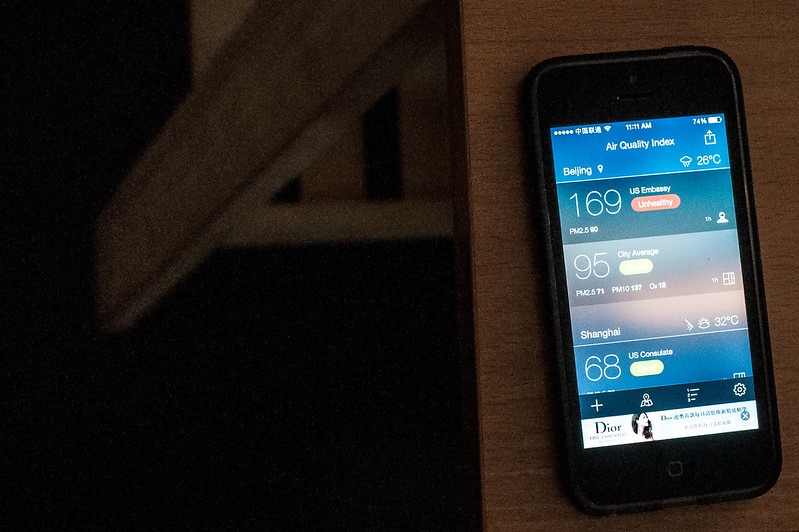 I'll admit it, I went to Beijing as part of a planned layover because I really, really wanted to see the pollution. I've been told that it is palatable; a dense, brown muck that sticks with you for weeks. I wanted to see it, then vow to never come to Beijing again, as many people I know have done.

For some reason, it was the clearest it has been in years when I went. So I missed out and had a great time.

Taking advantage of the free 72-hour layover visa available at the Beijing Airport (a normal China visa for Americans is upwards of $200) I planned on 2 days of just kicking it. No tourist stuff, as I did all that 6 years ago.

798 is the perfect place for that sort of thing.

The sheer number of nerdy coffee shops is a testament to the success of 798. Originally a communist-era factory complex, this space on the edge of town has been taken over by art; studios, galleries, workshops. 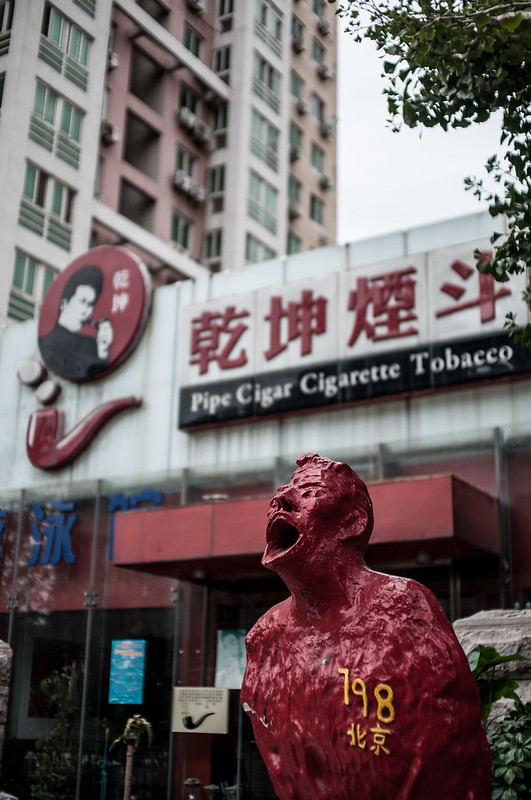 You can wander around for hours. 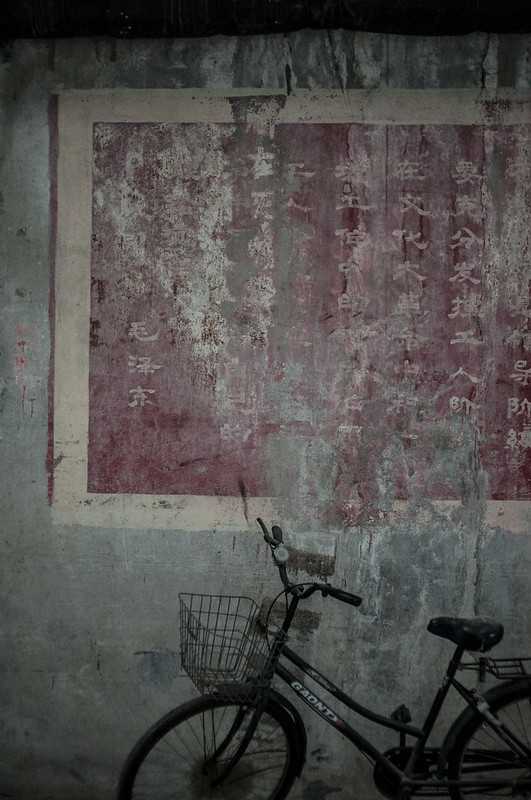 Old communist slogans remain in the darker alleys, while the streets are filled with whatever.

Apart from 798, I just rented a bicycle for a few yuan and aimlessly cycled around the city. Beijing seems built for a tank parade, which means straight, wide roads with dedicated cycling lanes. 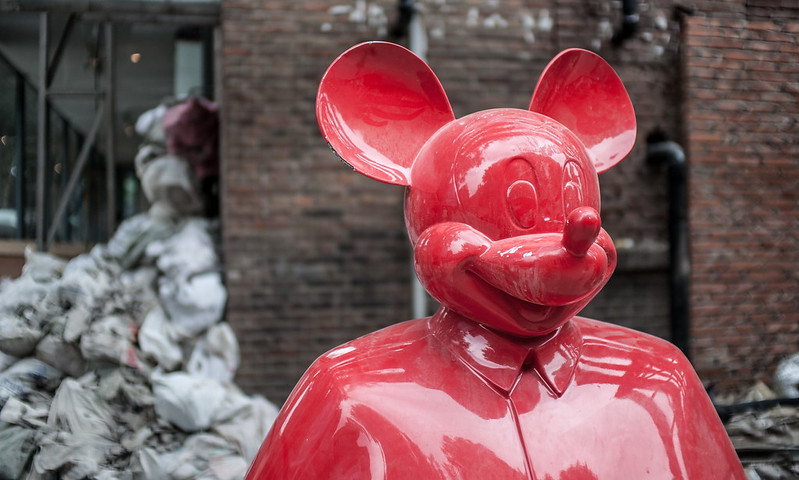 Mickey approved! I pretty much cycled the suggested routes #1 and #2 from this site, with an extended 30 minutes down Chang'An (the 20 lane boulevard is dotted with massive infrastructure buildings, it is crazy). Stopped a lot for food and beer and chilling on benches.

Temple restaurant. Wow, this place is legit for lunch. Around $25 gets you a massive course lunch in this 600 year old temple / restaurant. Dinner looks to be spendy, so go for lunch if you are looking for the fanciness on a budget. 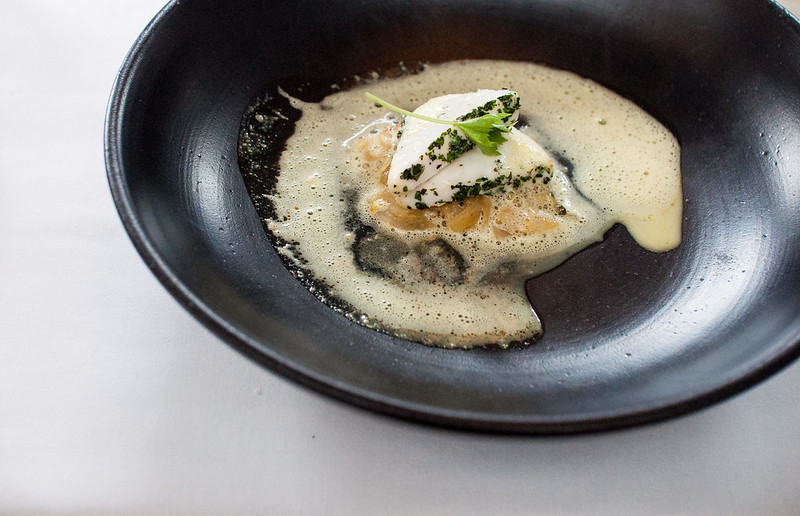 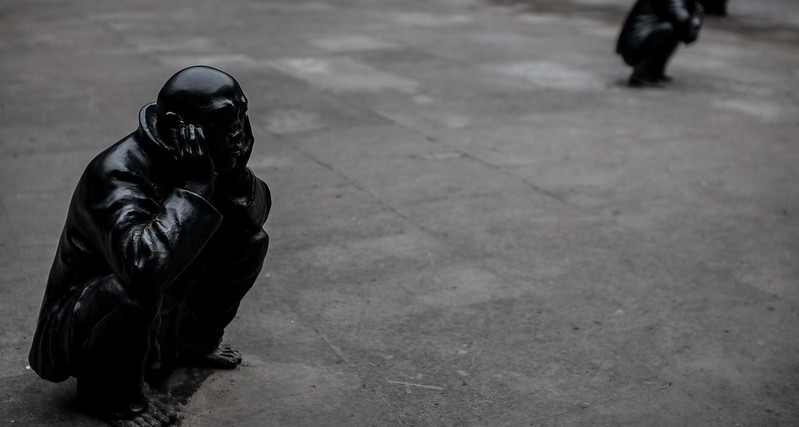 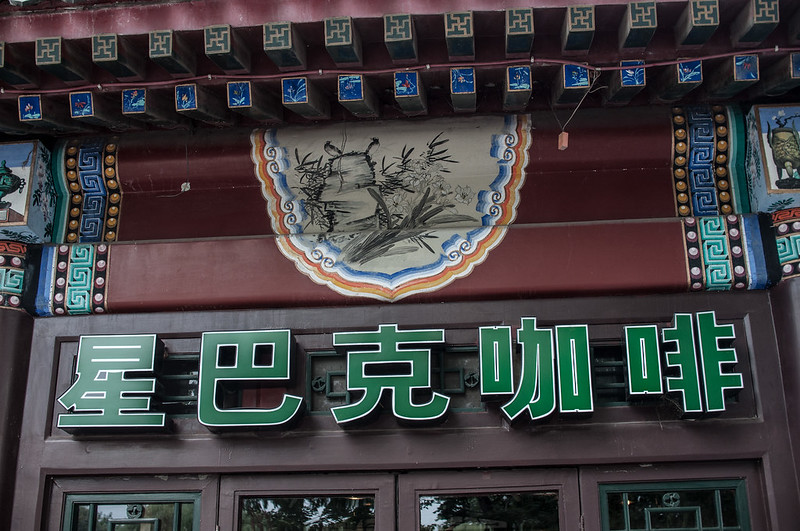 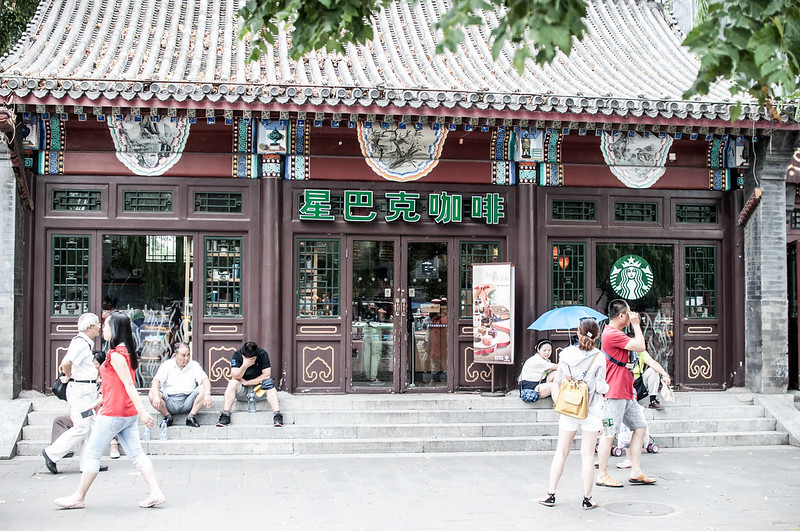 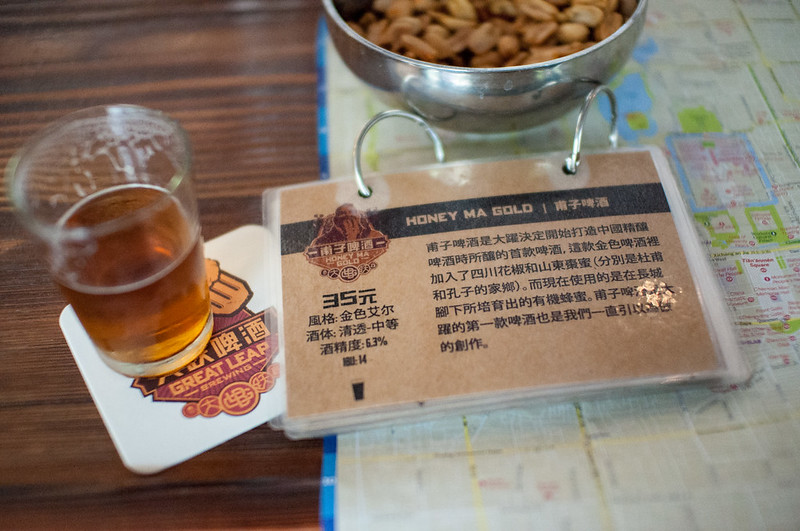 Great Leap Brewing. I would become a regular at this one if I was in town. Solid micro-brew. Prices are cheap? expensive? I really don't know the value of the yuan, and everything is obviously cheaper than in Japan. 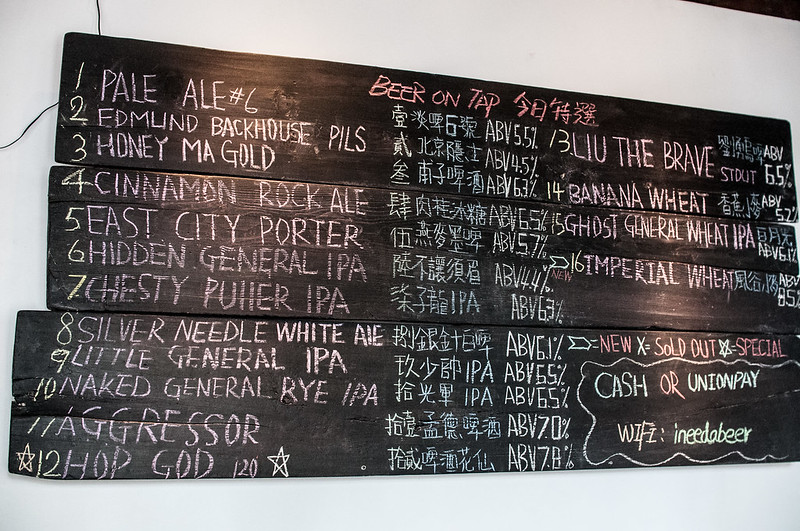 I would have liked to sample more, but some old guy scammed me into buying an overpriced massage on the street and I was low on cash. Good massage though, and I would gladly pay him that $20 again. 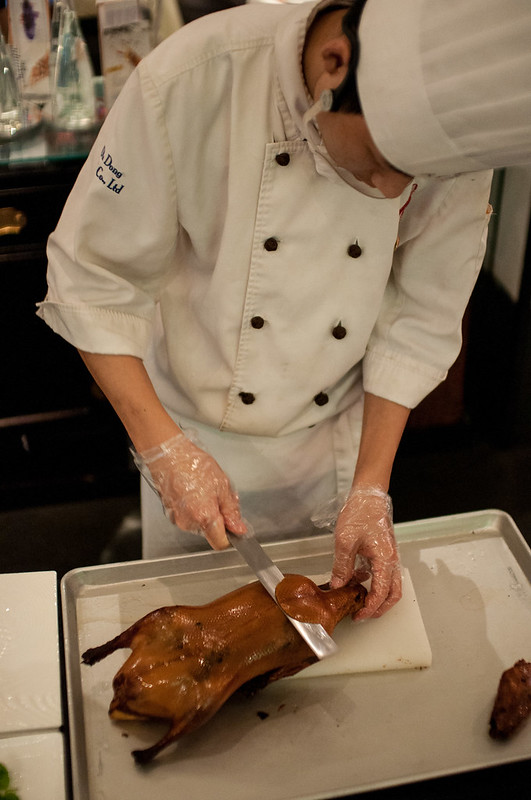 Da Dong is arguably the most famous Peking duck restaurant in Peking. 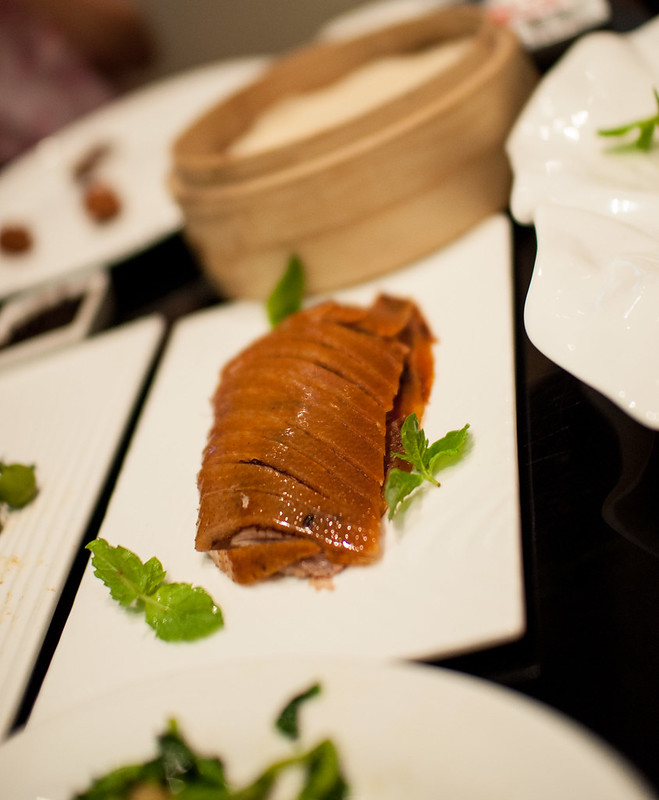 Awesome, but I think they were stretching with their menu. Most of it is a bit on the fancy-fusion side, with Japanese dishes starting to weasel their way in, and I think they added all that to justify raising prices across the board. But that is just me complaining for the sake of complaining; the duck was rad. 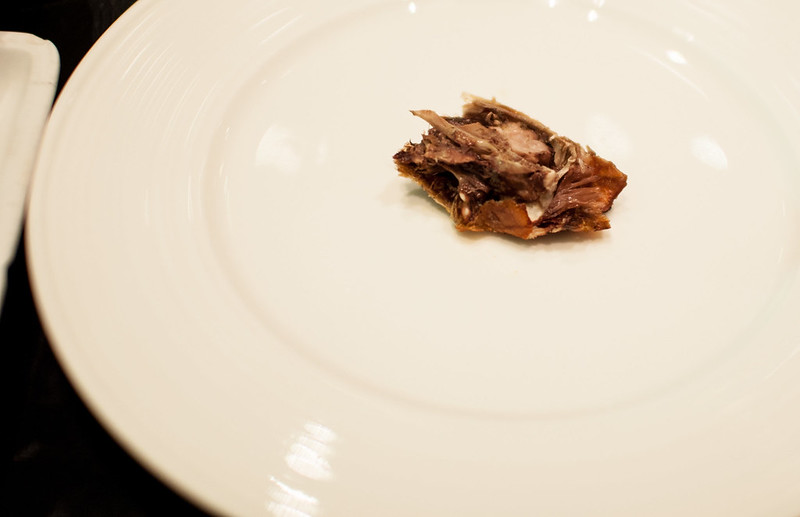 I also ate some tantanmen:

张妈妈特色川味馆 was a bit better than 鑫渝都摊摊面, though 鑫渝都摊摊面 supposedly had some authentic spices that 张妈妈特色川味馆 lacked. 张妈妈特色川味馆 is a must-eat if you are looking for that sort of thing.

Hope this helps someone out with ideas in Beijing. And remember, if the customs people tell you that you need to register with the local police, you should do that. You don't want to end up in the airport holding cell like I did.

My bad on the police thing. Item added to list of bullshit authoritarian procedures best not ignored.